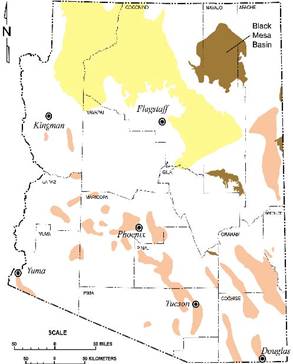 URANIUM OCCURS NATURALLY IN THE NORTHERN AREA OF THE STATE. Previous exploration on the Arizona Strip in northern Arizona has resulted in the discovery of eight breccia pipe ore bodies with production in the 1980's and early 1990's totaling approximately 19 million pounds of U3O8.  Energy Fuels is currently mining Arizona breccia pipes.  Total amount of mineable uranium discovered to date in breccia pipes in northern Arizona is estimated to be in the range of 35 million pounds.

Breccia pipes may be present in the area shown in yellow (Source: Arizona Geological Survey).

Uranium occurrences are known throughout the State in a variety of different geologic settings (Wenrich and others, 1989).  By far the most uranium production, however, has been from the Colorado Plateau in northern Arizona. Some of the uranium there is associated with sandstone units.  The richest deposits, the ones that have greatest potential today, occur in what geologists call "collapse-breccia pipes," or simply breccia pipes. The high grade of these deposits makes them attractive exploration targets. These deposits represent the highest grade deposits identified in the United States.

Although thousands of pipes are at or near the surface, only about one percent of them contain uranium ore bodies.  By 1989, 13 uranium-orebearing breccia pipes had been identified. Wenrich and others (1989) concluded that at least 40 more pipes have excellent potential for development as orebodies.

Most of the uranium ore produced from breccia pipes in the Arizona district was processed at the White Mesa Mill located in Blanding, Utah.  There is currently an estimated resource of 13 million pounds of eU3O8 in several breccia pipes in Northern Arizona awaiting production.

Uranium is found across Colorado in many different geological environments. Some of the United States largest and highest grade deposits occur within the Rocky Mountain and Colorado Plateau provinces (see map).  Uranium also occurs in the Great Plains province of northeastern Colorado. 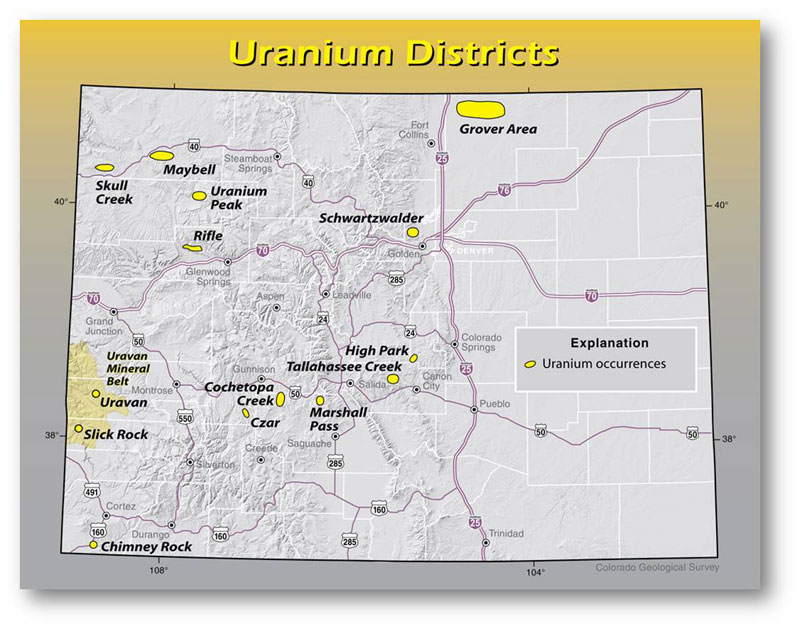 On the Colorado Plateau of southwest Colorado, more than 1200 uranium mines were driven from outcrop into the Salt Wash member of the Morrison Formation during the twentieth century. The mines were underground and very sinuous, as the miners attempted to follow the river channel deposits containing the uranium. Many of these same mines are being reentered today, and further developed.  There remains an abundant uranium resource within southwestern Colorado and the central Rocky Mountains of Colorado.

On Colorado’s Great Plains province, the uranium deposits do not outcrop at the surface, but are deeper underground.  The most practical way to recover these deposits is through the environmentally safe process knows as in-situ recovery or more commonly ISR.  It is a misnomer to apply the term mining to ISR.  ISR is a relatively simple process whereby a benign mixture of groundwater and dissolved oxygen is pumped into a deeply buried mineralized sandstone, where it contacts, dissolves and complexes the uranium, and this mineralized solution is then pumped back to the surface where the uranium is removed. One of the ways explorationists located these underground deposits was to study naturally occurring uranium anomalies in groundwater to zero-in on deposits.  It is likely that many deposits still remain to be discovered on the Great Plains.

URANIUM IN NEBRASKA AND WYOMING

Uranium was first discovered in Wyoming in 1949, but the most famous discovery occurred in 1953 when Neil McNeice located the radioactive mineral in the Gas Hills of central Wyoming. Production during the 1950s centered around the Gas Hills and the nearby Shirley Basin. 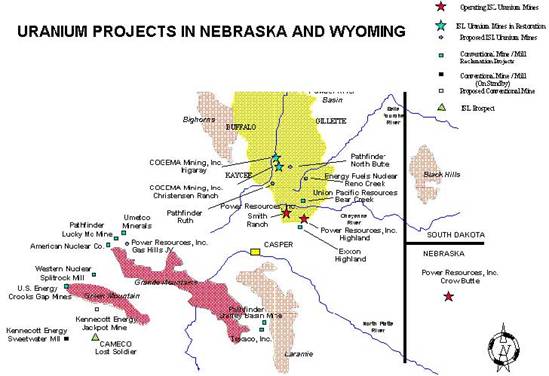 Production declined in the mid-1960s, but then picked up again in the late '60s and '70s with the discovery of major uranium deposits in the Powder River Basin, including: Christensen Ranch, Smith Ranch, Morton Ranch and Exxon's Highland Mine and the Crow Butte deposit in Nebraska. Conventional mine production peaked in 1980, and then decreased in the early '80s through the early '90s when many ISR projects were placed on standby or simply shut down and restored.

At its zenith, the Wyoming uranium industry employed 5,300, and total production peaked at 12 million pounds. Since the first discovery, Wyoming mines have produced 210 million pounds of U3O8. 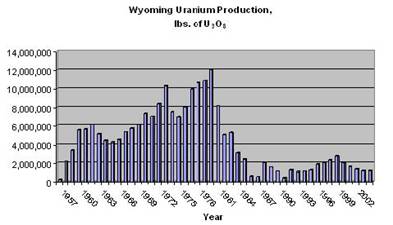 Today's strong uranium market is allowing Wyoming and Nebraska operations to expand production capacity, provide jobs and a safe environment for future production of a reliable source of domestic energy.

New Mexico’s Grants Uranium Region has been the most prolific producer of uranium in the United States. With production as early as 1948, over 347 million lbs. U3O8 has been produced from the region, mainly during the years 1953 through 1990.

RESOURCES ARE LARGE  A review of the EIA records shows that during the past fifty years in the US, some 949,333 exploration or development holes have been drilled, spanning over 437 million feet or 82,765 miles within a land position that encompassed some 19 million acres.  Total uranium exploration and development expenditures that have been documented by EIA since 1966 amount to $6 billion in Y2000 dollars.  Much of this activity was in New Mexico and resulted in the discovery of uranium deposits in New Mexico’s San Juan Basin. 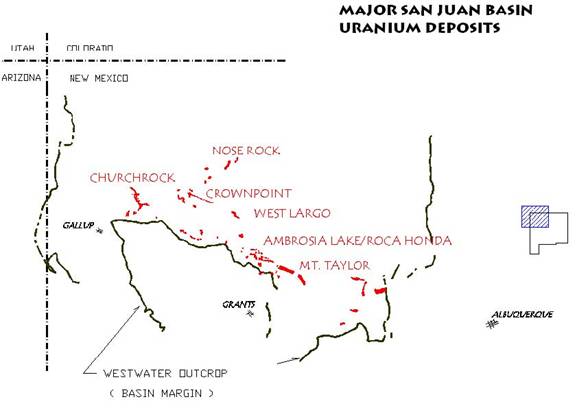 SIGNIFICANT POTENTIAL REMAIN  The exploration potential in the Grants Uranium Region is vast.  This energy resource will be extremely valuable to the United States as more and more demands are placed on finite resources to produce electricity.

URANIUM OCCURS NATURALLY ALONG THE GULF COAST There are many shallow uranium deposits along the lower coastal plain of Texas. These deposits are commonly associated with oil and gas resources. 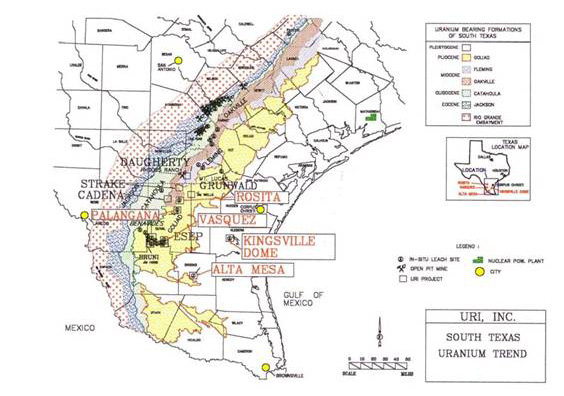 TEXAS RESOURCES ARE A VALUABLE ASSET The Texas Gulf Coast Uranium Region has been one of the most prolific producers of uranium in the United States. With production as early as 1961, over 76 million lbs U3O8 has been produced from Texas with an economic value of $3,000,000,000 at current market prices. This represents the one of largest concentrations of uranium production in the United States.

SIGNIFICANT RESOURCES REMAIN The exploration potential in the Gulf Coast Uranium Region is vast. This energy resource will be extremely valuable to the United States as more and more demands are placed on finite resources to produce electricity.

Uranium recovery operations in Texas declined dramatically through the 1990’s and was placed on standby in 1999 because of the depressed uranium market that resulted from the liquidation of large government (cold war military) stockpiles. Uranium production is now resuming because inventories have become depleted and market prices are rising to economic levels that are reflective of the cost of production.

URANIUM IN SOUTHEASTERN UTAH OCCURS NATURALLY AND HAS BEEN A SIGNIFICANT ECONOMIC DRIVER IN THIS AREA OF THE STATE OVER HISTORY.  The quest for uranium has historical roots in Utah.  Initial Utah uranium mining began in the 1870s and 1880s on a small scale, with ore shipped to France and Germany in 1884 for use in the forming of salts and oxides as colorants for ceramics and dyes, in the manufacture of glass and pottery, and as aids in photography and steel plating.

The eastern and southeastern regions near the basin margins of the Green, Grand, and Colorado rivers in Utah contain deposits of uranium.  Other areas where uranium is found are west of the La Sal Mountains, south of Richardson, at Mill Creek, north of Moab, at Cold Creek (twenty miles north of Price), and at Temple Mountain.

By 1906 nearly 200 tons of uranium were mined annually in Colorado and Utah.  World War I sharpened the demand, as vanadium (found with uranium only in the Colorado Plateau which straddles the Utah/Colorado border in southeastern Utah) was used as a steel-hardening agent.  Nearly all the known deposits at that time were located in the Four Corners Area, and the market demand was high.

Shifting trends affected and altered Utah's uranium industry. Between 1921 and 1940 the production of uranium in Utah and the West proved negligible.  However, during the Cold War period of the 1950s and 1960s uranium again reigned as a "wonder metal."  The uranium strikes of the 1950s created another "bonanza" period in Utah mining. By the mid-1950s, almost six hundred producers on the Colorado Plateau were shipping uranium ore.  Employment in the industry topped 8,000 workers in the mines and mills. Another bonanza in penny uranium stock established Salt Lake City as "The Wall Street of Uranium."

THROUGH CONVENTIONAL UNDERGROUND MINING AND MILLING.

Today, Utah is home to two conventional uranium mills in the United States:  the operating White Mesa mill, owned by Energy Fuels Inc. near Blanding, and the Ticaboo mill on standby owned by Uranium One located near Bullfrog and the In Southeast Utah there are a significant number of past active mines which are considering restarting operations with the continued uranium price increase. In addition to the existing infrastructure, a number of companies are carrying out exploration programs for new resources.

You are now leaving the Uranium Producers of America website.